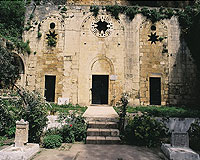 The church is founded in a cave that can be entered through a portal built in the Crusader era, in which the apostle Peter is said to have formed the first community of people who were called Christians, a few years after the death of Jesus.

The place was declared sacred by the Vatican in 1963 and since has become a pilgrimage site. Every year on 29 June, on the death day of St. Peter, a special ceremony is held in the cave. At the end of the cave there is a tunnel which the first Christians is said to have used as an escape route.