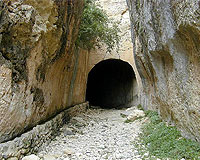 The village Mağaracık, the modern successor settlement of the ancient port city of Seleucia Pieria, lays in about 7 km northwest of Samandağ.

Because of regular and devastating floods in the port city, the Emperor Vespasian (emperor between 69-79 AD) allowed a tunnel to be built: The hard rock was dug to divert the water from the city. The 1300 meters long, 7 feet high and 6 meters wide tunnel is even considered by today's standards as an architectural marvel. The tunnel was partially destroyed, however, is largely accessible. Today, Mağaracık together with the neighboring Çevlik is a popular area thanks to the beautiful beaches between them.