ın addition, however, this region has a surprising variety of landscapes which leave an unforgettable impression: the erosion valleys in the Phrygian mountains, the rocky cones of Cappadocia which are also known as fairy chimneys, the leafy tops of Köroglu Mountains or coloured karst slopes on the Sakarya River. At the heart of Central Anatolia is Cappadocia: a fairytale landscape of eroded tuff. In the high mountain steppes in Goreme, cone-shaped rock formations rise in a ghostly landscape. The rock formations were formed by now-extinct volcanoes, whose lava flows covered large parts of the highlands. The volcanoes spewed lava, ash and solid rocks. These were washed away by erosion, leaving behind the solidified basaltic lava, which formed the present-day rock formations. Cappadocia was located on the famous Silk Road. The people living there were often attacked by many different invaders. Therefore, the residents eroded the soft tufa to make strongholds to hide. And they became all the underground cities which are open to visitors today. 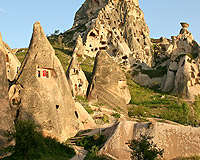 Göreme, ten kilometres away from Nevsehir, is a touristic centre. Nevertheless, it is still a small central Anatolian village. 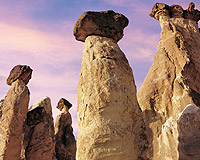 Avanos is located on the Kizilirmak, the longest river in Turkey. This small town of about 15.000 inhabitants dates back to the Hittite period. 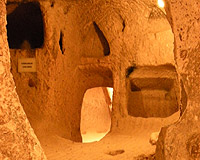 Under the city of Derinkuyu (literally “deep well”), 40 kilometres south of Nevsehir, is the most famous underground city of Cappadocia.